Hey, guess what! I’ve just published a steamy, brand new holiday story called Making Movies. I know, I know — no one is more surprised than me. I was watching a, um, very popular holiday movie (points for guessing which!) and this story popped into my head, fully formed. 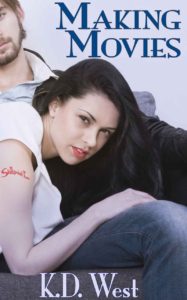 Lauren usually loved the firm’s Christmas bash. The food was good, the drinks were flowing, and her fellow employees cut loose — even the notoriously uptight CEO Jillian.

And the previous two years, once everyone had gotten thoroughly plowed, she’d dragged Ray off, and they’d indulged in a particularly sweaty, particularly spectacular fuck.

The first time, two years before, they’d started making out in the hallway outside the bathrooms, when Glynna, the firm’s controller, had stepped out, rolled her eyes at them and snarked, as always, “Get a fucking room.”

And so, giggling, they had done just that: